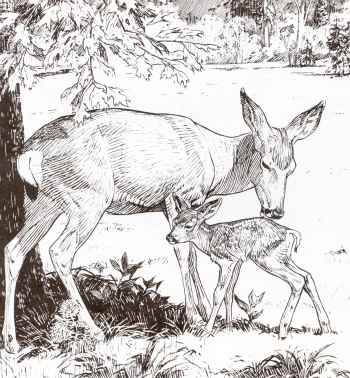 
The Yosemite Mule Deer is unquestionably one of the most beautiful of all of Yosemite National Park's wildlife!

He got his name from his large  mule-like ears which seem to always be in motion. When he is alarmed they are erect and pointed forward facing the possible danger. When the deer is angry, his ears are often flattened sideways. When he is hiding, they are sometimes laid back out of the way against his neck. You can tell a lot about how a mule deer is feeling from what he is doing with his ears.


The babies, called fawns, are born in late May and early June. Often they are twins, but sometimes there are triplets. The mother mule deer will hide the fawns to keep them safe, and they know instinctively that they must remain perfectly still until she calls them.

The fawns reddish coat with its white spots blends well within the forest thickets. This is referred to as "protective coloration" and is their only defense during the first weeks of their lives.

If you find a fawn that is hidden, leave it alone! Do not touch it! Its mother knows where it is and has not forgotten it.

If you give it the human smell from your hands you will make it easier for the deer’s animal enemy to find the baby.

By the time they are about four months old many of the fawns have lost their spots and no longer require their mothers' milk.


Deer are browsers, and much of their food is made up of twigs, buds, and leaves. Mule deer are also fond of acorns and grasses.

Because of the danger from coyotes, mountain lions, and other enemies, the deer nervously gobble their food and it is stored in a special part of the stomach. They then chew it later when they are feeling safer; very much the same way as a cow chews its cud on the farm.


The male deer…called a "buck," grows antlers from the top of his head. His antlers are not like the horns of cattle because unlike horns, he sheds his antlers each winter and a new set grows back in the spring.

A young buck grows an extra point on his rack of antlers each year but it is not possible to tell his exact age by counting them. This is because as he gets older fewer points grow.

The Yosemite mule deer bucks use their antlers for fighting during the mating season and for self defense all year long. Each season when they do drop off, discarded antlers form an important source of bone-building food for the small creatures of the forest who love to gnaw on them.

Next to man, the mountain lion is the greatest enemy of the mule deer but coyotes and bobcats will often hunt them too.

Deer can run swiftly and speed is their main protection from their enemies. But sometimes even this is not enough as recorded by two Yosemite Rangers in the case of "Deer Kill! Feast on the Grapevine".

A mother deer will sometimes show great bravery when she feels that her fawns are in danger. They have been seen charging at full-grown coyotes to chase them away.


As tame and friendly as the mule deer may seem in the setting of the national parks you must remember that they are still wild animals. Their front hoofs are sharp and they can strike-out swiftly with them without warning. Visitors who don't understand about wild animals are injured every year while feeding and trying to pet the deer. Sometimes deer are given things that they shouldn't be eating, and this of course can make them sick. It's always fun to watch the deer from a safe distance, but please don’t ever feed them.

Yosemite Mothers And Their Babies


Bill Berry was one of the premier wildlife artists of his time. His use of the pen and ink medium captured his subjects with a life-like realism rarely seen today.

This beautiful set of high quality prints, capture four of the larger mammals of the Sierra. Three of these, the Mountain Coyote, Mule Deer and Black Bear are quite commonly seen. The fourth, the Mountain Lion, almost never.

Each print is 11 x 14 in size and printed on heavy stock. Beautiful framed!

Place your cursor over the image below and then follow the link to get your set today! (Perfect for babies room). 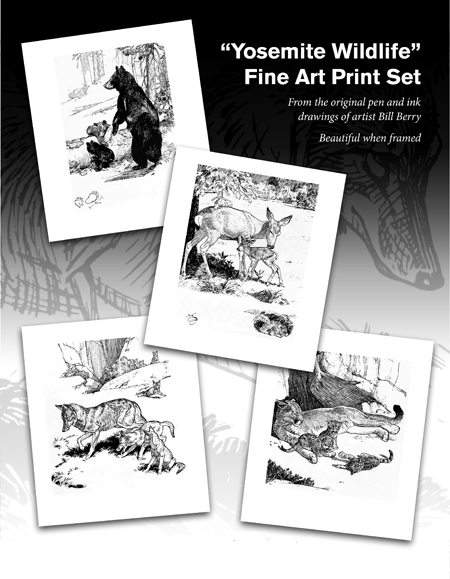 Click here to get your Yosemite Animal Prints Today! 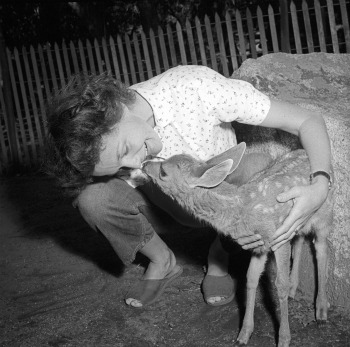 "The newborn deer was found curled up and hiding where its' mother had hidden it. The well-meaning person who found her, picked her up and took her to the Park headquarters thinking that her mother had abandoned her.

Through the years, a variety of animals found shelter in our home as we did our best to nurse them back to health.

Now the little deer came to live with us, and we named her 'Tauie'.

She was tiny when she first arrived; probably only a few days old, but she took to the baby bottle that we offered her and grew quickly. We were delighted since sadly, quite often the little orphans that we brought in did not do as well, either due to injury or other trauma.

The animals of the park were our pets since dogs and cats were not allowed to be kept. There was the constant danger of a non-native pet escaping into the park...it simply couldn't be risked.

So there were snakes and lizards, squirrels, mice, and various birds. But Tauie was special to us. It was a sad day when the time came to release her. We all knew that this day would come and that she would be ready to go. From that day, every fawn that we saw we called 'Tauie'".

To return to the Home Page from Yosemite Mule Deer please click here. 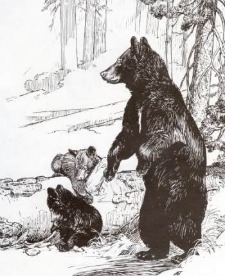 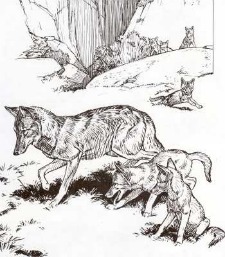 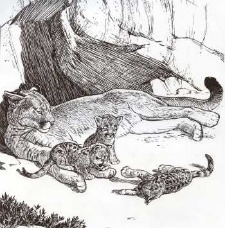